Patience and perseverance can indeed lead to success. As the Covid-19 pandemic just began to spread, AIA Maryland’s lobbyist American Joe Miedusiewski and I had been standing for a couple of hours within a crowded lobby in the halls of the State House in Annapolis. We are waiting for our turn to enter the hearing room to testify before the House Committee on Economic Matters. I was frantically editing my notes as I prepared to present the only opposition argument for a bill that could easily have dire implications for the profession and the public.

On any given day during the Maryland General Assembly Session, people scurry in and out of hearing rooms; and speed-walking State representatives and their staff attempt to avoid eye contact as they quickly approach their appointed committee rooms. On this day in early March, I listened intently to the banter of State politics and impromptu corridor debates, all the while watching the scrolling agenda on the monitor. Was bill HB1087 up next? Needless to say, my last-minute notes did not amount to much. This is often the typical and tedious routine one experiences while waiting for the opportunity to see democracy in action. Frankly, I have developed a great respect for the men and women who lobby on our behalf each and every day.

Fortunately, American Joe has been a great teacher. Through his guidance, I have somehow learned to manage the process.  However, as many times as I have testified, I still get quite nervous. But I recognize that this keeps me focused and attentive, a necessity when at any given moment a tough or loaded question could derail your testimony.  I recall a moment some years ago after I had presented my testimony on a given bill only to have a Senator try to throw a curve ball question at me. The question made no sense, and he clearly had not been listening. My mind was nervously racing to gather my thoughts, and I slowly began to respond, “with all due respect Senator . . .” No sooner had I started to speak, another Committee Senator engaged the first Senator in a debate based upon my testimony. American Joe quickly tapped me on the shoulder and whispered, “Sit back, watch, enjoy and let them go at it; it is out of your hands now.” Joe smiled with knowing assurance, and I felt like a kid who had a front row seat to a classic tennis match. This was theater at its best. But we must not dismiss the importance of this transactional process because it directly impacts the laws under which we function as a profession, as a community, and as a State.

Well, Joe and I were still waiting for our turn up to bat. The hearings were moving slow this particular day. But much to our surprise, just as we were finally about to enter the hearing room, the Chief of Staff for the Delegate who sponsored bill HB1087 threw another curve ball our way. He approached us and asked, “Do you have a few minutes to meet with Delegate Williams?” … “Okay, yes,” Joe and I said with a slight inward panic. We walked across the main lobby and into the Delegate’s office suite without any awareness of who might be in attendance until we were face to face (albeit 6 ft. apart) with Delegate Williams, a Maryland Department of Labor representative, and the constituents who initiated the bill. After the obligatory fist and elbow pumps, it was immediately apparent that each had their own agenda, and we were the last ones invited to the party. Suddenly, an impromptu negotiation of the bill we so strongly opposed ensued. Extemporaneous situations like this demand preparation. Yes, you can prepare for this, but it requires doing your homework, anticipating certain questions, and figuratively sitting in your opponent's seat. You cannot make a reasoned argument for your position without a clear and unbiased understanding of their position.

Joe and I thought we were walking into a firestorm. But in such perceived difficult situations, equanimity must be front and center. The discussions could not have been more amicable.  Each person expressed their concerns, each person listened intently, and each person worked to find a solution upon which we all could agree. There are certainly times when you must stand your ground in the best interest of those for whom you serve. This was not one of those times. Negotiation entails compromise. Hence, I offered three recommendations that would be written and structured as amendments to the bill. No one walked out with everything they wanted, but no one walked out disappointed.

Joe and I exited the suite smiling, recognizing that the system worked. This was very new for me. Certainly, I am not naïve enough to think that we should be so lucky the next time for I know that the legislative process can be a mine field to navigate. But for me, this experience presented a renewed understanding of our participatory democracy and elicited a passion to continue to be a voice, be it a very small one.

I strongly believe that democracies can be self-healing because they are built upon the participation of its citizenry. My involvement with the AIA’s legislative process certainly has been personally self-fulfilling and most assuredly self-healing.

SPECIFICS ON BILL HB1087 REFERENCED ABOVE

The American Institute of Architects (AIA) Maryland’s Legislative Committee works hard each year to proactively address hundreds of bills. These bills may cover the gamut:  Architectural licensing; energy conservation and sustainability; historic preservation and tax credits; A/E procurement regulations; State preference and reciprocity; sales and use tax for professional services; and, building and life safety regulations. These of course do not begin to cover the subject matter that finds its way into our yearly legislative spreadsheet.

As noted in my story above, HB1087, “Business Occupations and Professions - Architects - Scope of Licensure” was introduced in March of this year. The bill, which had important implications to our profession, partly made its way through the House of Delegates legislative process. As it did for many bills, COVID derailed HB1087. Hence, this bill never completed the steps and never reached the Governor’s desk for signature.

Very simply, it changes current law which sets the limits on the dollar value and scope of an alteration to an existing building above which an individual or entity must employ a licensed Architect ultimately to obtain the Architect’s professional seal and signature on the permit documents. For decades, that prevailing dollar limit was $5000.

Within the past 10 years, those regulatory limits have been called into question. This year, after she was approached by constituents, State Delegate Williams led the charge to amend the current legislation and increase the dollar limit from $5,000 to $50,000 but the legislative revisions did not consider the effect on the public’s health, safety and welfare. The legislation would allow significant modifications to buildings by contractors, building owners and others who are not educated, trained, or licensed to meet all current building, life safety, energy, and accessibility regulations, nor to meet current local permitting requirements. The proposed legislation was extraordinarily broad, and the language and limitations were unclear and confusing.

Though we knew that an increase to the $5000 limit was past due, the current legislation and proposed amendments required the introduction of specific language to address compliance with the health, safety and welfare of Maryland’s people, its communities, and the built environment. I prepared the amendments and we formally presented them to Del. Williams. We are glad to see that the bill will be reintroduced this year, and will include the negotiated amendments, highlighted as follows:

We understand that Senator Griffith has been approached to sponsor the bill on the Senate side as the bill gains traction for the upcoming General Assembly session. We have spoken to Senator Griffith to assure her that we are behind the current bill as negotiated.

For the full version of the proposed revised bill, contact Dan Bailey. 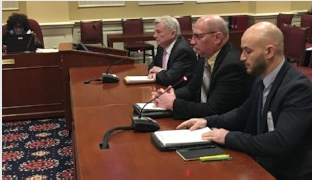