GET THE NEWS DELIVERED TO YOUR MAILBOX

During these pandemic times, all of us have found different ways to sooth our souls, to stay balanced, and to maintain our physical and mental well-being. I enjoy reading and…

Almost every architectural project involves a design that is both new and useful. According to the US Patent and Trademark Office, Novelty and Usefulness form the legal definition…

Patience and perseverance can indeed lead to success. As the Covid-19 pandemic just began to spread, AIA Maryland’s lobbyist American Joe Miedusiewski and…

Linear Fireplaces are one of the hottest trends in modern designs.  …

Our Architects have many passions. Jeff Penza has always been a car enthusiast, having grown up in the muscle car era (well before he had a driver’s license!).…

BBJ - HOW THE PANDEMIC IS…

How is the pandemic reshaping the American home? The Baltimore Business Journal recently interviewed Laura Thul Penza about the current demand for adding upgrades and new…

Our Architects have many passions. Leah Penza, Architectural Associate at PBA, has been collecting and rescuing orchids for a few years. Her interest started with a large…

THE CASE FOR RE-THINKING…

Many architects and designers have proffered ideas about how to design healthy buildings in light of COVID 19. However, the current pandemic need not be the motivation to…

Update your mudroom with style. PBA designs and re-envisions entry spaces to become important organizational areas. Functionality is key; however mudrooms can still be…

Our Architects have many passions, including sailing. …

Penza Bailey Architects is honored to be selected for this year's Home & Design Magazine Portfolio of 100 Top Designers. Jeff Penza is featured along with his…

AGING IN PLACE = DESIGN FOR…

As staying in is the new going out, serene outdoor spaces like these designed by PBA are in greater demand. Clients place more emphasis on outdoor multi-functional areas, which can…

Our Architects have many passions. Jeff Penza has always been a car enthusiast, having grown up in the muscle car era (well before he had a driver’s license!). Jeff imparted his love of automobiles to his son Brian, who returned the favor by suggesting taking their cars to sanctioned driving events. These turned out to be great father and son bonding experiences.

Initially, they began driving in events organized by the Sports Car Club of America (SCCA) and the National Auto Sports Association (NASA). One of the events is Autocross, in which drivers navigate courses set up in large parking lots using orange cones to define the course. And of course, the object is to drive as quickly as possible!

The other activity Jeff and Brian began was to drive on an actual racecourse in High Performance Driving Events (HPDE). Surprisingly, there are a multitude of racetracks open to car clubs around the country. Summit Point Raceway is a mere 90 minutes away in West Virginia, which serves as a “home track” to those living in the Baltimore – Washington region. HPDE assigns drivers to a group depending on their skill level and experience. Beginners and intermediate drivers learn in a classroom setting. Then instructors join them in the passenger seat to give immediate hands-on guidance and feedback.

As Jeff’s passion and skills bloomed, he began searching for a dedicated car to use exclusively for driving events. After considering many options for almost a year, he decided to purchase a 2006 Porsche Boxster S, with some 85,000 miles on the odometer. The Boxster is a quintessential sports car: light and with a high-powered mid-engine, it has ideal balance for the track. It also has a six-speed manual transmission, which is a rare sight these days, but a must have for an enthusiast driver. The Boxster is relatively affordable, and in Jeff’s mind, it is a very attractive car.

These days, Jeff primarily attends Porsche Club of America – Potomac Region events, and in addition to Summit Point, he and Brian have met at Mid-Ohio Sports Car Course outside of Columbus, Ohio, Pitt Race outside of Pittsburgh, Watkins Glen in upstate New York, Dominion in Richmond as well as Virginia International Raceway in southern Virginia.

So what is the purpose? While some may think that the objective is speed, enthusiasts will point out that it is easy to go fast on a straightaway. The object (and the thrill) is to drive smoothly around corners! Driving your car at its limit with other cars (with PCA, often very expensive cars!) on a racetrack provides an extreme adrenaline rush, while in a safe and structured environment. Racetrack driving also allows participants to safely and legally improve driving skills and learn vehicle dynamics, which translates into safer driving on public streets. Jeff and Brian are certainly better drivers on the streets because of their shared experience on the track. But the real benefit is having father and son bond while doing something they both love. 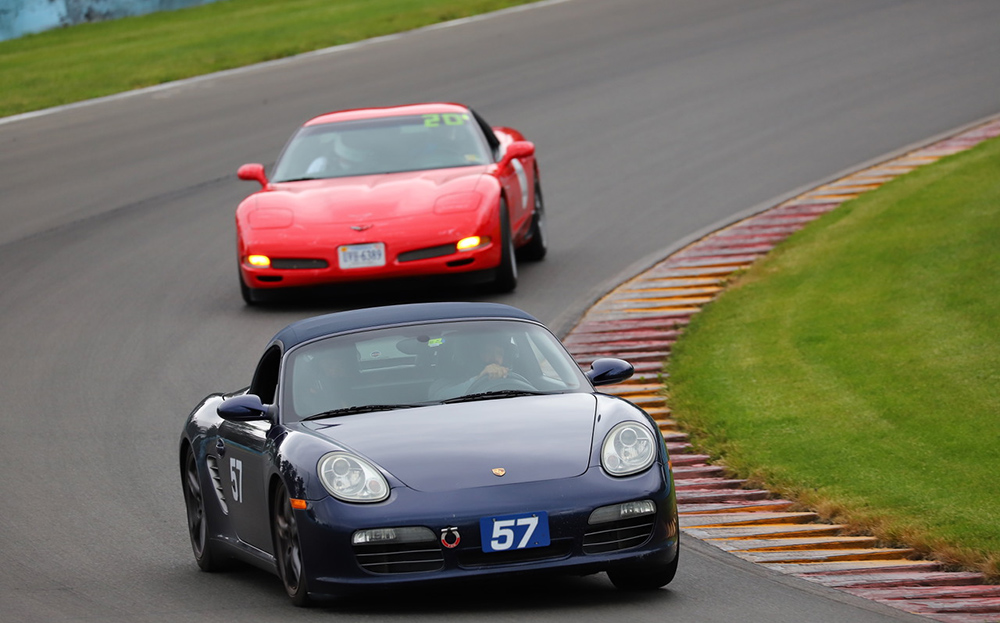 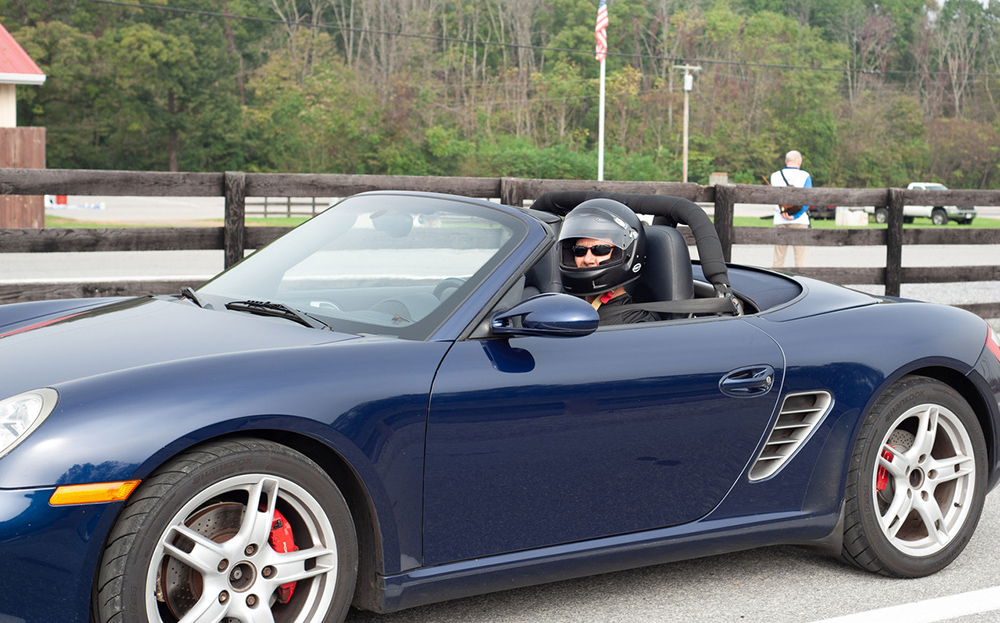 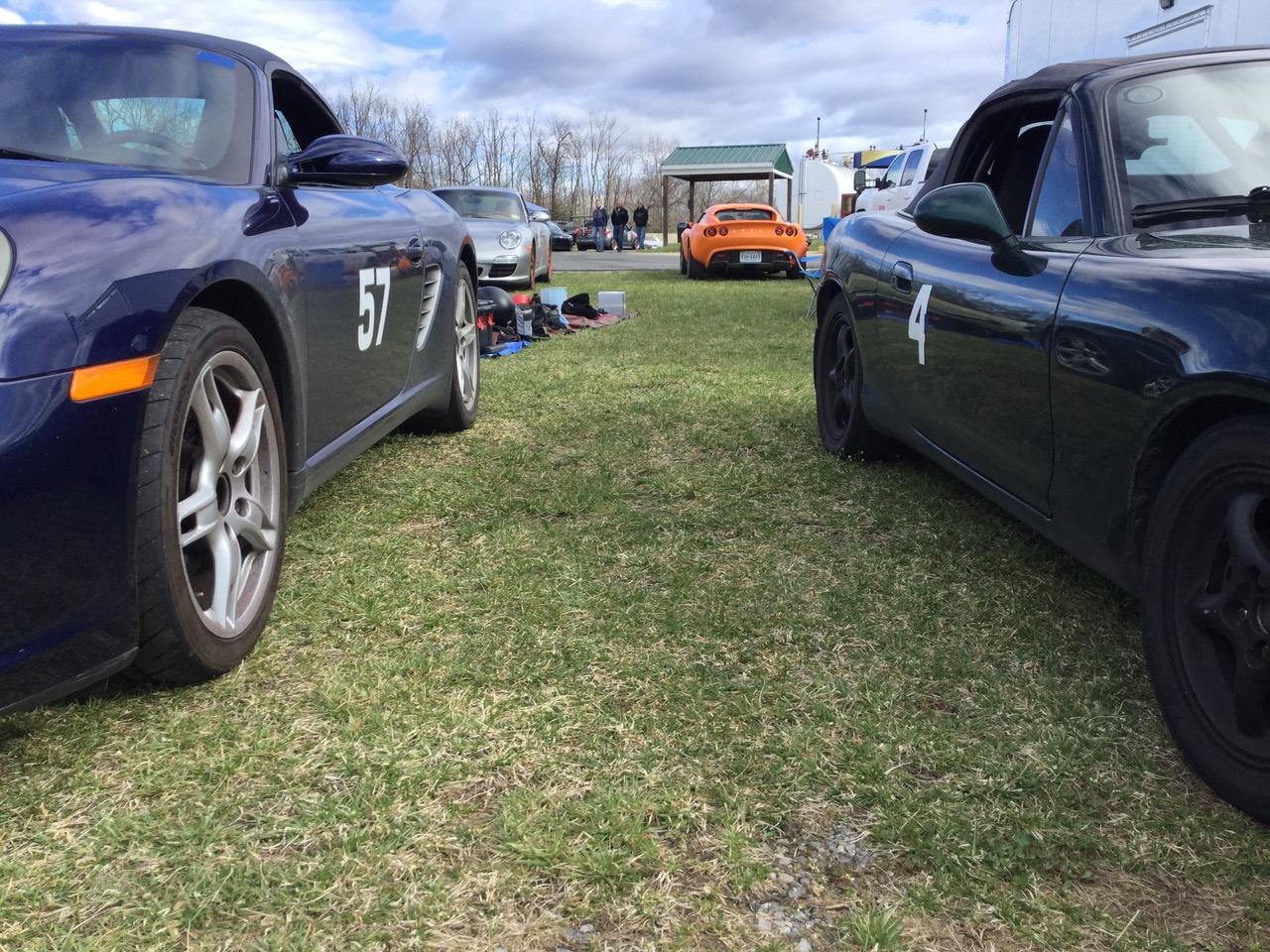